“Features belonging to the culture of a particular society, such as traditions, languages, or buildings, that were created in the past and still have historical importance”

Traditions and languages are rather hard to picture, but buildings are easier and I indulge a lot in that activity I must admit. We’re a bit spoilt for choice in Paris, what with a great number of listed buildings from the 17th century onwards. Most mediaeval buildings were destroyed in the 19th century when Paris was overhauled by Haussmann, but a lot of the 17th and 18th century ones are still there. As above in the district of Notre Dame.

The City survived WWI (despite some bombings which reached the Capital and traces of which can still be seen here and there and namely at the back of La Madeleine). And it survived WWII too but that was a close shave. Von Choltitz was meant to press the red button and Hitler was raving mad: “Brennt Paris?” he barked. Is Paris burning? No it wasn’t, thanks to Franco-Swedish diplomat Raoul Nordling (Orson Welles in the film), the Man who saved Paris.  “Tack Mr. Nordling!”

Actually, in the above picture, I had to tamper quite a lot with road signals and posts and all the knick knacks that modern urban architects have imagined to destroy the perspective of our streets. I hope you forgive me for that. I did away with them but I guarantee you would still recognise the building if you went there. 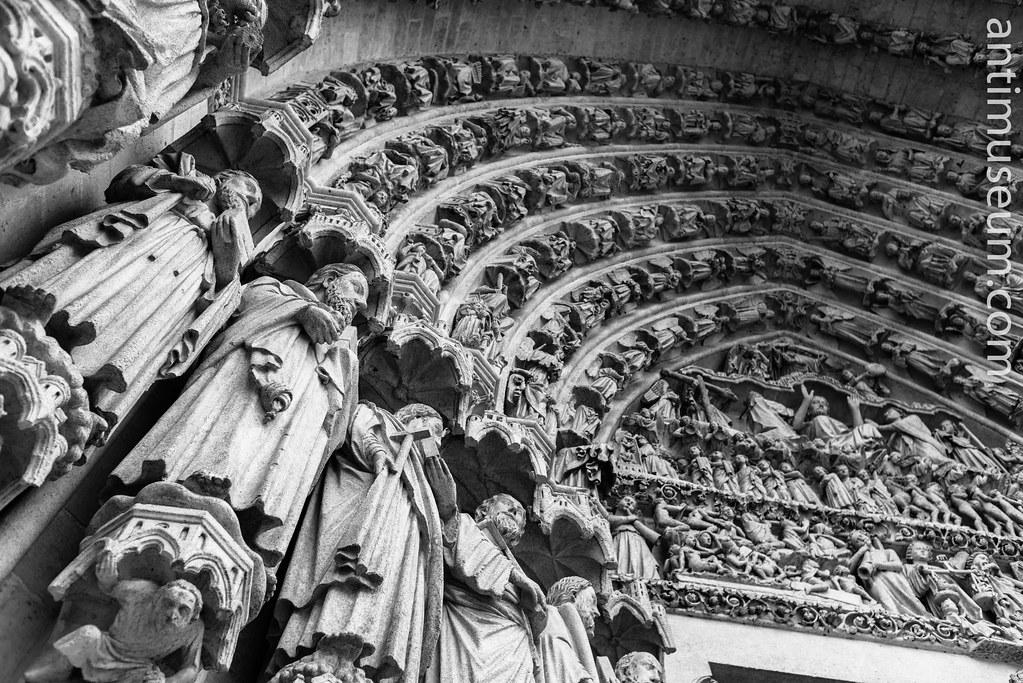 Not all Cities were that lucky. Amiens, 1 1/2 hour from Paris up North, had already suffered a lot from WWI. WWII was even worse and the whole place was almost razed to the ground. The Cathedral escaped miraculously. Our Heritage, or at least part of it was preserved and one can still admire what is one of the tallest Gothic buildings in the world. We went there last weekend to visit relatives because my Mother’s family is from there.

I hadn’t set foot in Amiens for 5 years. I was very happy to be able to visit the City again. And strangely enough, it’s one of these places which is sort of going back in time, and the more you go there, the more old buildings crop up, refurbished, cleaned up, rebuilt. Europe is sort of living backwards, rebuilding the Heritage it so patiently and systematically destroyed over the past 100 years.

Not all places were that lucky. Brest, in Brittany, where my family is from, was entirely destroyed (as in the above picture). Strangely enough, it wasn’t destroyed by Hitler’s forces but by the US Air Force. As is often the case in Europe. That was for our own good. We bit the bullet. Almost nothing is left from the old City which was entirely rebuilt in the 1950s therefore eradicating our Heritage. 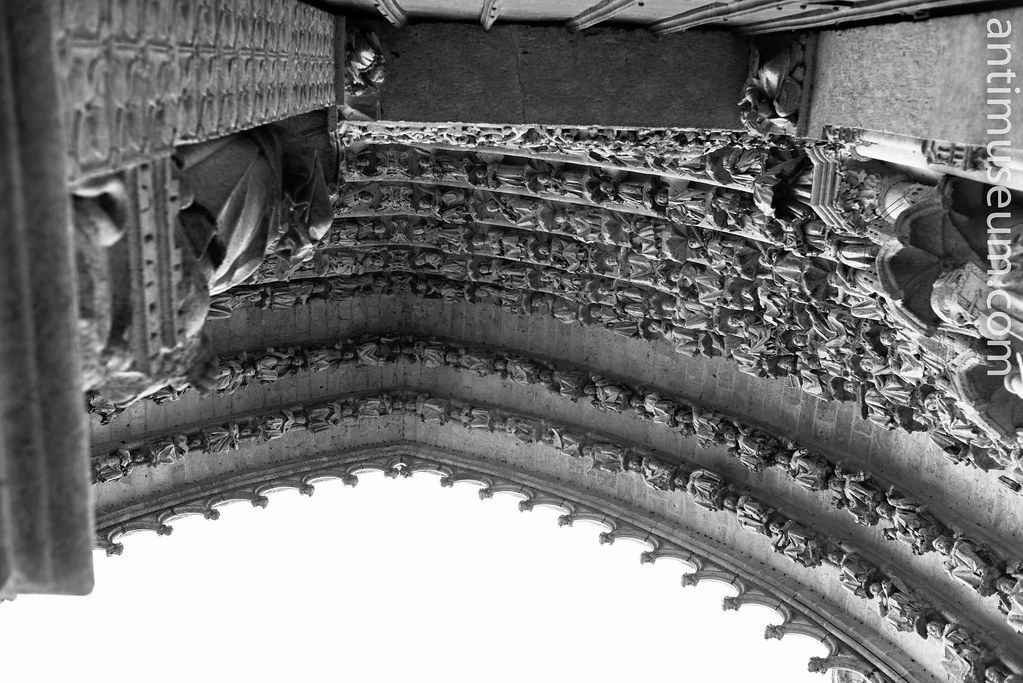 In Amiens we can still admire the Cathedral and its astonishing statuary. 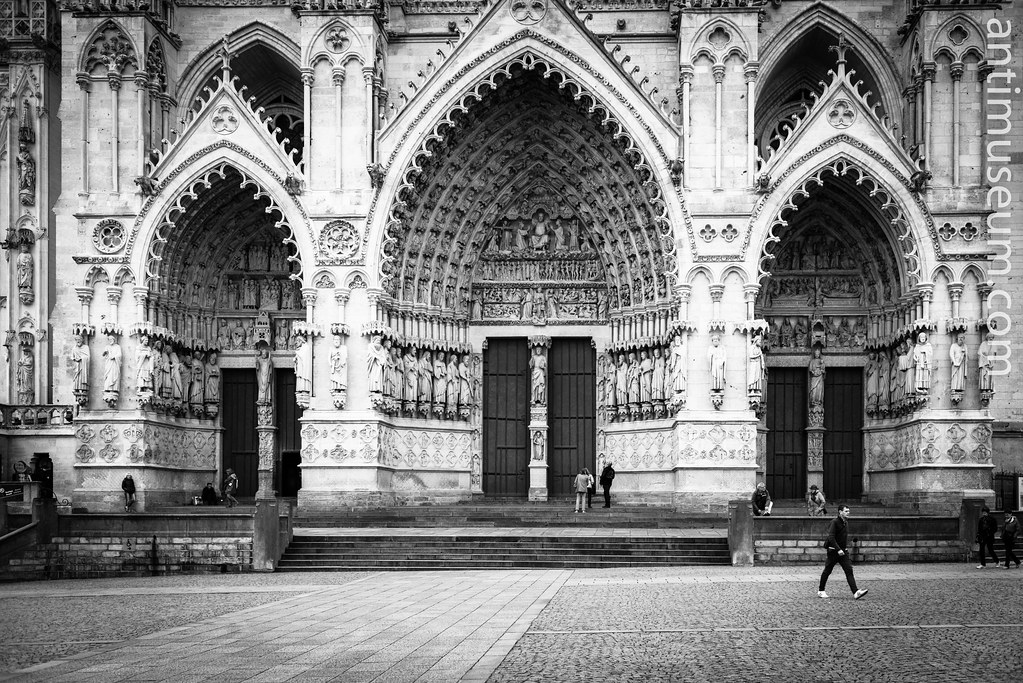 The main entrance to the Cathedral. 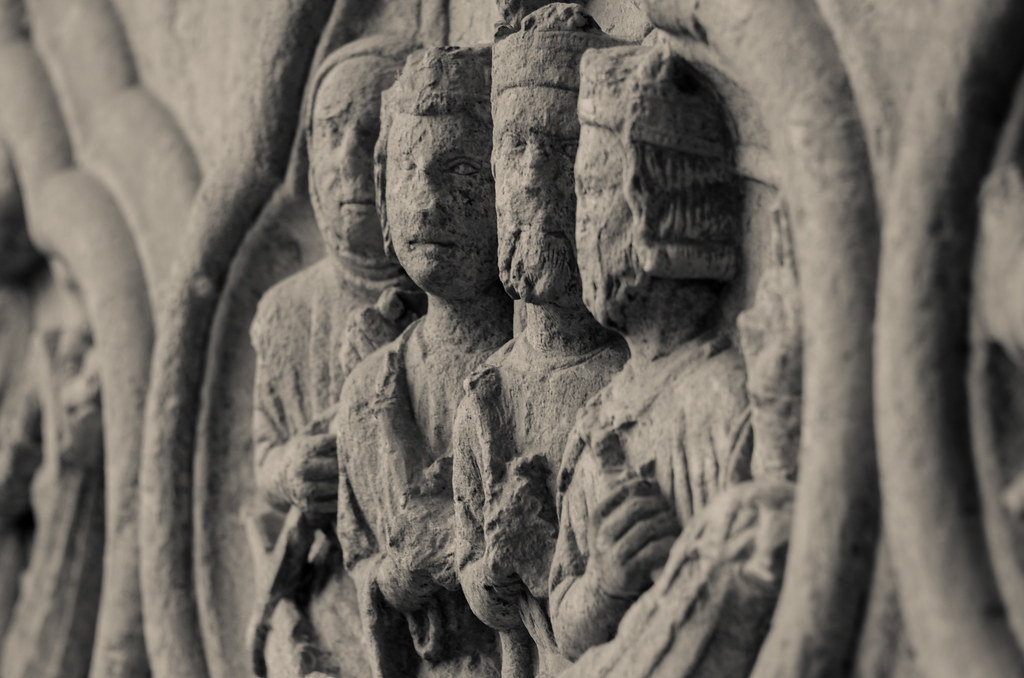 Expressive and beautiful statuary, which survived the Revolution. 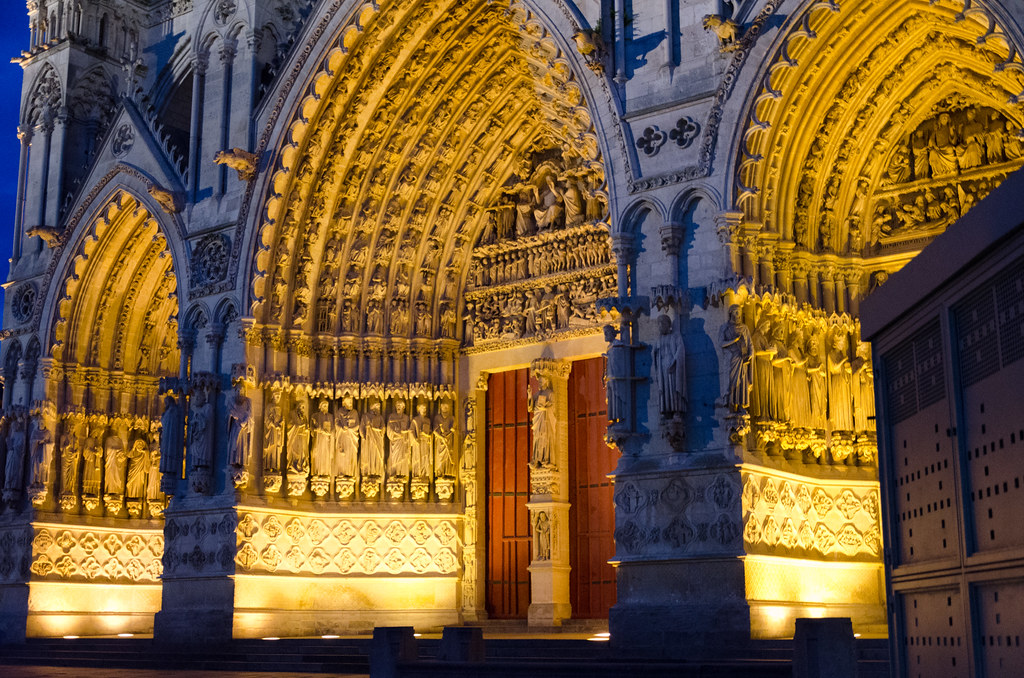 Light and sound shows enable you to imagine what the Cathedral looked like when it retained its colours. 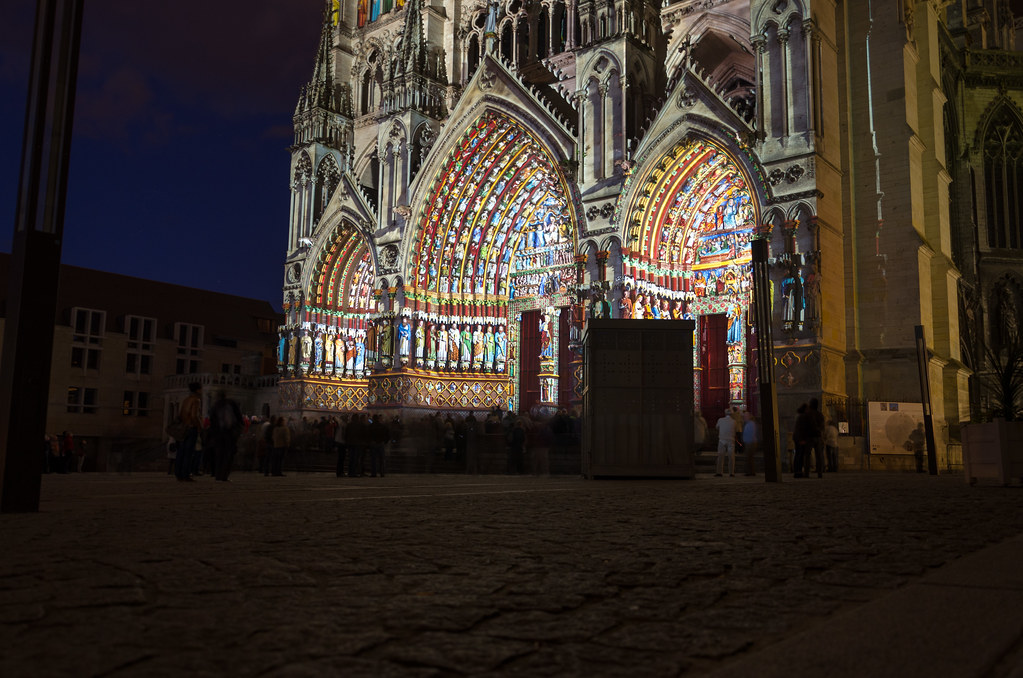 Hard to take pictures at night without a tripod. Here’s the best I could do. Now you can imagine what it looked like in the Middle Ages. 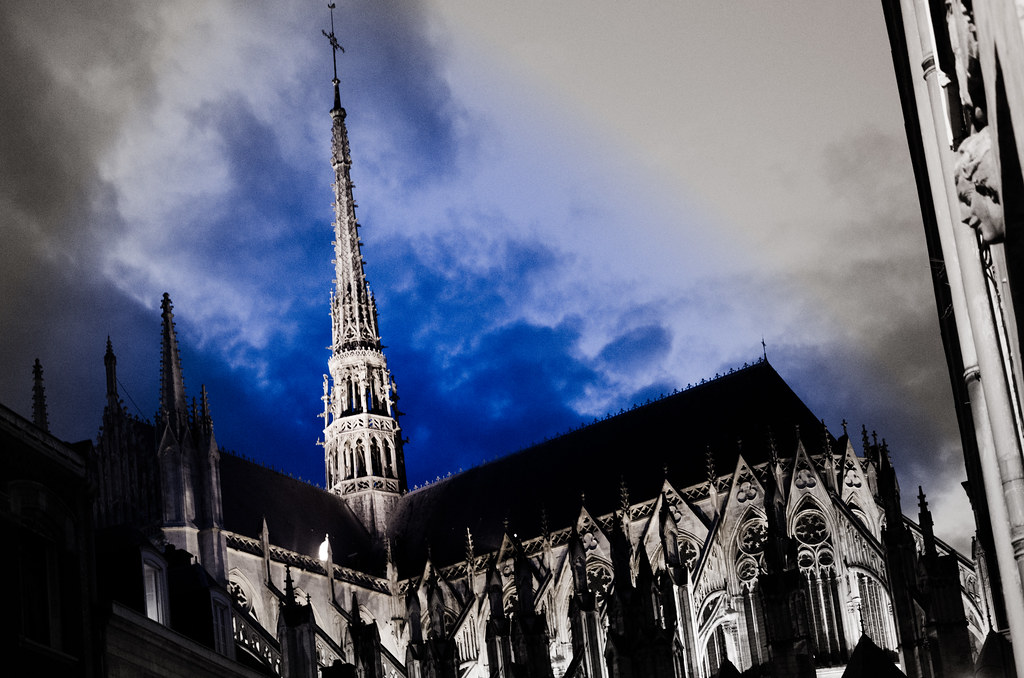 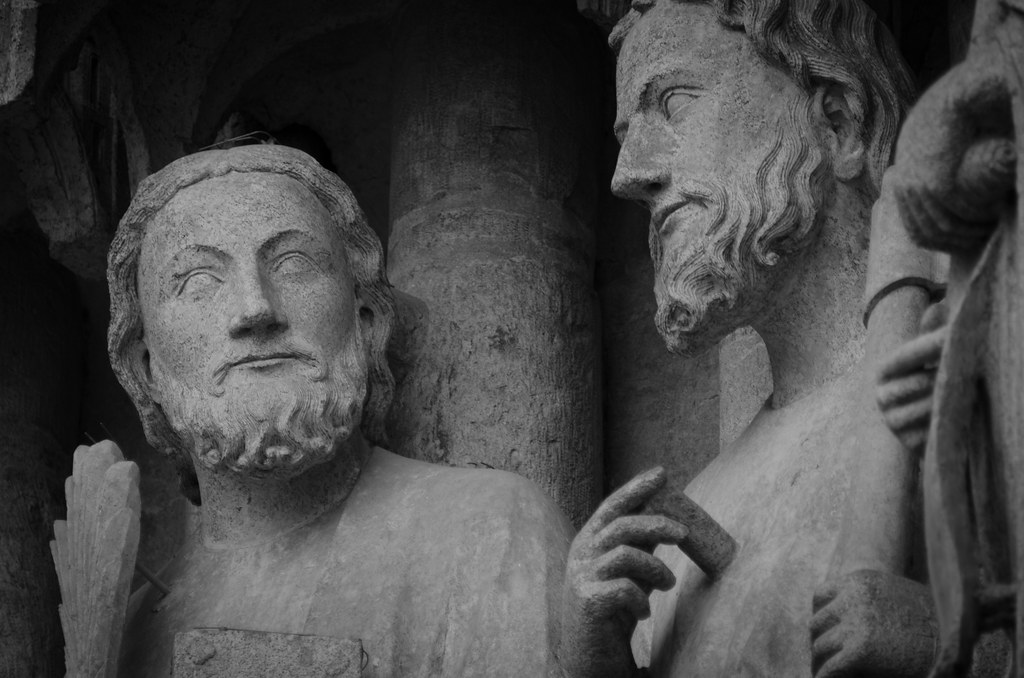 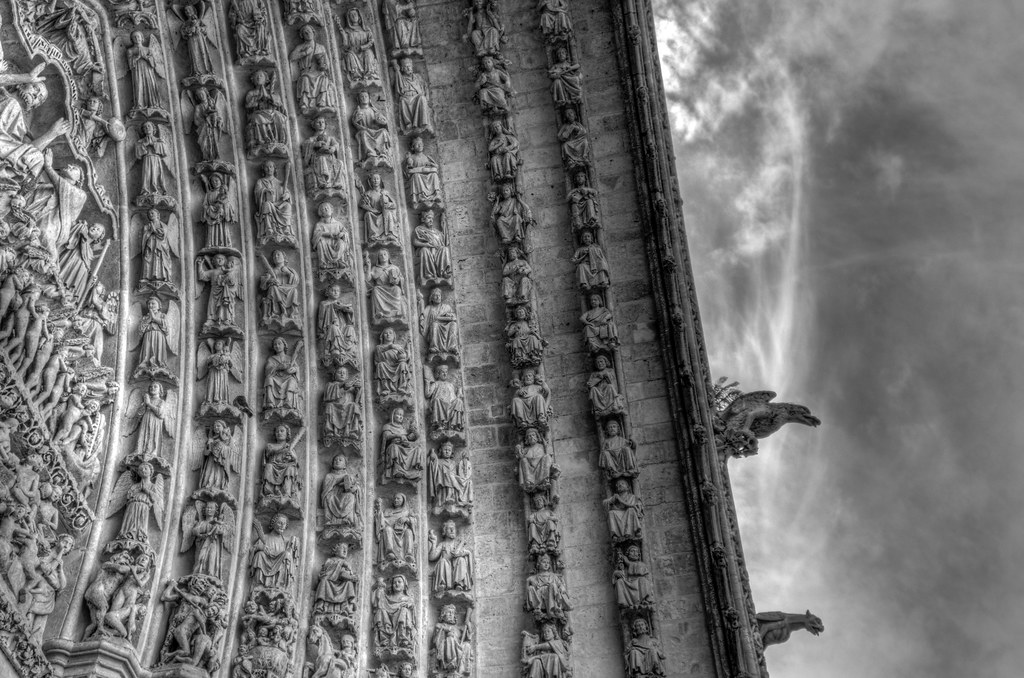 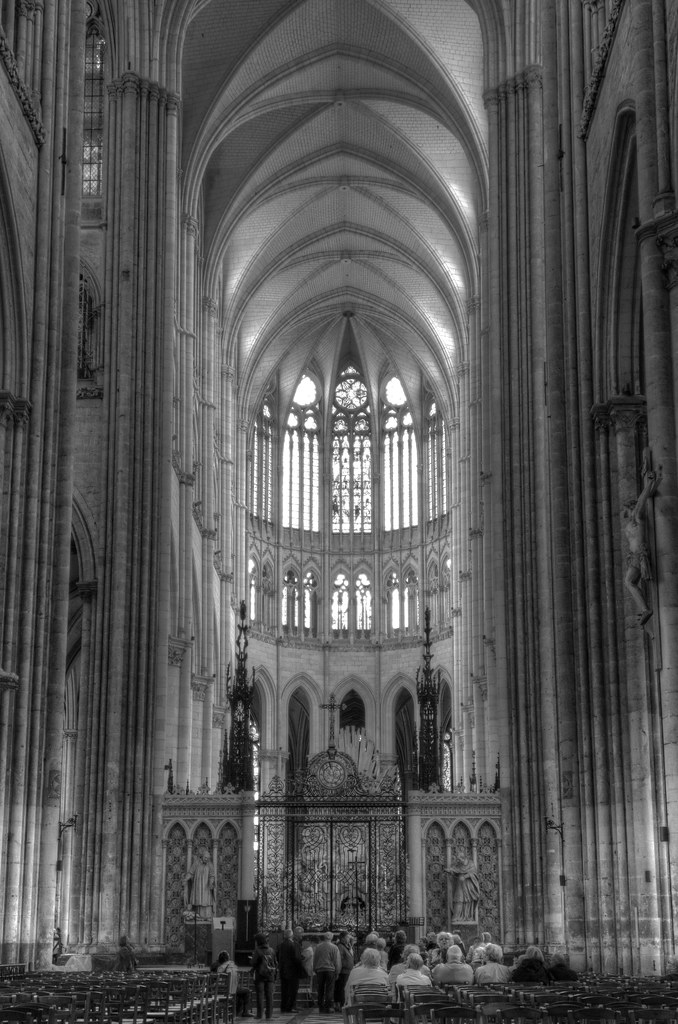 One of the tallest Gothic buildings in Europe. Heritage is a good thing when it’s not used by extremists who want to prevent others from benefiting from it.

6 thoughts on “Musings About Heritage, Wars and Buildings”